VOA – In the last few months Vietnam has held several high profile corruption trials as part of a crackdown on graft. The government says it is using severe punishments, including death, to deter corrupt practices. However, critics say the trials are also part of an ongoing power struggle in the top leadership. 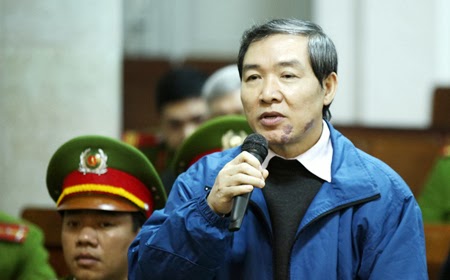 Last week the former chairman of Vietnam’s state-owned shipping giant Vinalines, Dương Chí Dũng, made a shocking allegation. Speaking at the trial of his brother, who is accused of helping him flee the country, Dung said he paid the Deputy Minister of Public Security $500,000 in a bid to avoid prosecution.Exposing such payoffs is a priority for the government’s intensified anti-corruption campaign. Recent investigations have resulted in jail terms for tens of public officials and some death sentences, including the former Vinalines boss, who fled to Cambodia after the company’s near-collapse under some $3 billion of debt.Vietnam’s economic woes have put the spotlight on mismanagement and bribery at state-run firms, and the ruling Communist Party recognizes the public’s anger, said Alexander Vuving from the Asia-Pacific Center for Security Studies.  “They [the Party] really want to do something to show the population to restore the regime’s legitimacy and rescue the regime from corruption. They are using the graft trials to deter against further corruption but also as a propaganda device to restore trust for the population,” he said. However, some critics say the anti-corruption purge has more to do with an internal power struggle between Prime Minister Nguyen Tan Dung and Chairman of the Communist Party Nguyen Phu Trong. Vuving said the prime minister is part of the “rent-seekers” faction – a group that uses their position to enrich themselves without benefiting society. Opposed to them is the “anti-corruption” faction under Trong, who is leading the crackdown. “I believe that at the very top of the Vietnam Communist Party there are people who are relatively untainted by corruption, there are also people who are deeply, deeply involved in corruption,” Vuving noted. “So you have both ice and fire in the same politburo.” The anti-corruption campaign has already prosecuted several high-profile officials and businessmen who are closely linked with the prime minister. This shows the campaign is more about political rivalry than good governance, said Professor Carl Thayer from the University of New South Wales in Australia. “Dismantling corruption is really aimed at the prime minister because he’s responsible,” he stated. “And it’s his cronies and friends who have benefited from it.”Although the corruption trials have received widespread media attention, there are few signs they are convincing the public that the government is truly tackling graft.Jairo Acuña-Alfaro, Policy Adviser on public administration reform and anti-corruption at the United Nations Development Program in Vietnam, said to convince the public, authorities need to change the behavior of lower-level officials who interact with citizens on a daily basis.“All these cases that are being discussed are very far away from the ordinary citizens. What the Vietnamese citizens want to have is a public administration that is free from corruption, that is free from abuse, that is free from a lack of respect,” said Acuña-Alfaro. “In order to do that there has to be some work in addressing the incentives, for the public officials to address publicly and transparently what are those incentives, what are those rents they receive from the public sector and then put the house in order.” Eighty-two-year-old Le Hien Duc is a veteran anti-corruption activist who receives tens of letters each week from people across the country seeking her help. She said she has been following the Vinalines case closely. She said she does not know anything about the law but in such a big case she agreed with the death penalty. However, she added that these cases should not eclipse the bigger picture which is to tackle corruption at its roots.

©2013 Brotherhood for Democracy. All Rights Reserved.